We are proud to announce that we have won a prestigious industry award for our socio-economic commitment to West Cumbria.

Franks Portlock won the Socio-Economic Commitment to West Cumbria Award in Britain’s Energy Coast Business Cluster (BECBC) Awards 2018. The award, which was sponsored by Balfour Beatty, was presented to the Franks Portlock team at a black-tie gala dinner, held at Energus, Workington on Thursday 22 November 2018. 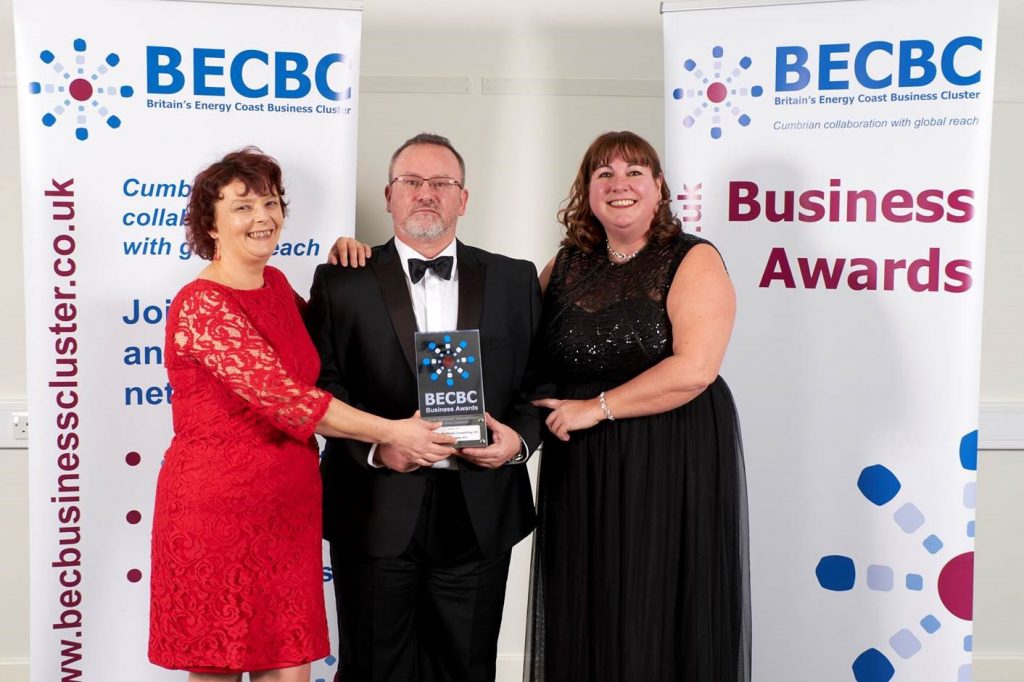 BECBC is a private sector led organisation, with members from SMEs to global companies with business interests in West Cumbria. In line with the organisation’s aims, the awards recognise and celebrate ‘Cumbrian collaboration’.

We undertake a range of activities and projects as part of our socio-economic commitment to West Cumbria, covering areas such as: employment training, educational and STEM development, volunteering and fundraising.

James New, Sellafield site contract manager and North West regional manager at Franks Portlock, commented: “I am honoured that Franks Portlock has won this prestigious accolade. We are dedicated to providing the highest quality service to our clients and delivering ongoing support and impactful change to the communities in which we work. It is fantastic that this has been acknowledged on such a grand scale.

“I would like to thank Sellafield for all of its support, as well as everyone who has supported us and the organisations that we aim to help. I would also like to congratulate the other winners on their success, as well as all those nominated.”

Phil Franks, technical director at Franks Portlock, said: “Providing sustainable economic and social changes in the areas in which we work is a core value of Franks Portlock. I am therefore delighted that we have won this award – it is testament to the continued dedication of James and the Sellafield team who go the extra mile to enhance and engage the communities in which they work.”

You can read more on our work in West Cumbria here.

Follow us on social media to stay up-to-date with our latest news.